The 1st  branch meeting for 2018, is April 10th at 6:30 for 7pm at our NEW location, St Ansgar Lutheran Church, located at 600 Lawson Rd  (the corner of Lawson Road and Wonderland Rd North, London).

Our guest speaker on April 10th will be re-enactor Robert 'Bob' Rennie. Bob will be dressed in 1812 period uniform and he will tell the story of Lieutenant-Colonel Henry Bostwick (please view pictures attached).

Mr Rennie is coming from the Kitchener area to speak to our London Branch. I hope that each and everyone of you will be able to attend and show him how interested we are in our local history.  Bob's real career is Director of Risk Management for Manulife Insurance. Bob is very passionate about being a living history re-enactor.  He portrays several different ranks from the War of 1812-15 era, as well as a Revolutionary War Captain and as a Reverend.  Whenever there is a shortage of enemy soldier re-enactors to shoot at, Bob will wear the enemy uniform and he has even portrayed an American Union Army soldier.  Bob's favorite roles are portraying his ancestors Captain Jonathan Williams UE and Lt Col Henry Bostwick.

The past several 1812 re-enactment “war years” kept Bob busy with over 100 days dedicated to events, video documentaries, and speaking engagements.   Henry Bostwick was a local citizen soldier in the War of 1812. To quote military historian Glen Stott, “If we have a Canadian hero in the War of 1812 in our area, it would have to be him”. Major-General Isaac Brock saw something in Henry that made him think Bostwick had great potential – and Brock was correct. Henry was called upon to lead the ground forces to Detroit at the beginning of the War of 1812. He provided badly needed leadership throughout the war, and he was the commander at the last battle of the War of 1812 on Canadian soil. Come and find out how this regular local citizen became an unsung hero of the War of 1812.

Please mark on your calendar these following dates of our up-coming meetings:

May 26th (Saturday) we are celebrating our London & Western Ontario Branch's 45th anniversary. It will be a huge event, with more to follow in a flyer.

I know it is not always possible, but please try to make as many meetings as you are able. Your Board of Directors puts a lot of effort to make these meetings happen and we appreciate the support shown by your attendance. 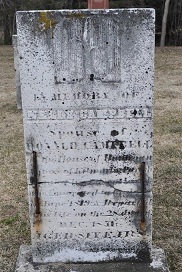 On International Women's Day it is important to honour the founding women of our communities.  Today we celebrate Nealliadh Helen "Nelly" Campbell of Aldborough Township.

Nelly Campbell, was the first to charge ashore at Port Glasgow in June of 1818 when she and 18 families arrived in Aldborough Township (now West Elgin).  These settlers were from the western Scottish Highlands, particularly Argyle.  This site was called Cnoc Neilliadh or Nellie's Rock in her honour.  Some stories include that she carried a barrel of salt up the hill. 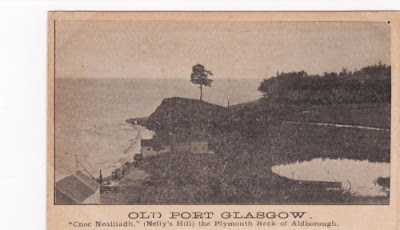 According to the West Lorne Women's Institute Tweedsmuir, Nelly was born in Kilmartin, Argyleshire, Scotland.  The story is she was a daughter of the Duke of Argyle and fell in love with her father's butler (a cousin), Donald Campbell.  They eloped and married without permission.  Her father was opposed to the marriage so requested they leave for the colonies.  I'd like to do more research into this Duke of Argyle connection.  Eventually, Nelly and her 9 children immigrated and she brought kegs of gold.  Her husband arrived in October 1818.

Nelly prepared the first meal for the settlers of potatoes she brought from Scotland and fish caught in Lake Erie.   At the time of the Tweedsmuir the kettle was part of the Old Boy's Association artefacts.  She was said to be a sharp businesswoman and once walked alone, along a blazed trail all the way to York (Toronto) to get the deed to land she wanted for one of her sons.

At some point Nelly and Donald and their sons moved to Southwold Township.  Her daughters lived in Brook Township near Alvinston.  Nelly passed away at the age of 81 on December 18, 1851 at her daughter's home.  Her body was taken on a bob-sleigh to Fingal Cemetary, near Fingal in Southwold Township for burial with others of her family.

In 2019 we are commemorating the Landing of the Settlers in Aldborough and are searching for descendants.  Please contact our office 519-762-3072  info@backuspagehouse.ca 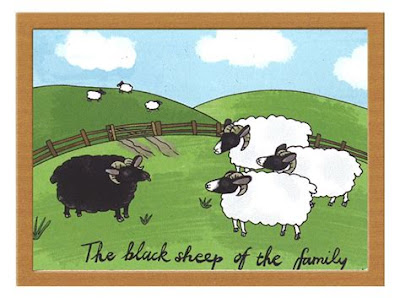 We all have them right?  The black sheep of the family.  Sometimes they are the most fascinating of ancestors and there is a free online database for those in trouble with the law.  I found out about Black Sheep Ancestors during a course I'm taking online https://www.futurelearn.com/courses/genealogy/5

Try it out and let me know what you find!  Happy searching.

Membership Has It's Privileges

The Tyrconnell Heritage Society is always looking for new members. We have special membership rates available for individuals, families, businesses and organizations. Email us at info@backuspagehouse.ca or call us at 519-762-3072 for more information.